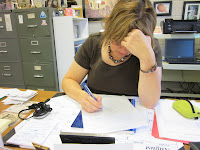 Acquiring knowledge is a lifetime endeavor. And it seems like I have spent a greater part of my existence in a formal academic setting. You could say I’m a perpetual student. I really didn’t plan on doing this, but truth be told, I love learning. Thirty years of my life have been spent in the classroom--60 percent of my life has been dedicated to the pursuit of knowledge. It’s not that I want to be a know-it-all. I just find that there are so many wonderful opportunities to explore the world and meet new and fascinating people.
Growing up, I was the student who always sat in the front row, eager to hear what the teacher had to say. I was the student who took meticulous notes in every single class. I studied voraciously (well, except maybe for science class at least until I was privileged to take biology) and took my exams with glee. I wasn’t necessarily competitive with anyone else but rather with myself. I constantly appraised my own performance and tried to improve my scores, and if I didn’t improve, I’d chide myself for being stupid. I do not berate myself anymore but I still strive to continue learning because without learning, my life would be utterly boring. One of the biggest disappointments of my life was when I could not attend college after I graduated high school. My parents simply did not have the money to support me. Ultimately, it was a good thing that I waited ten more years before returning to college. I had grown up quite a bit and truly appreciated the opportunity to earn a post-secondary education. Because I had some life experience I became the mentor to some of the younger students who were struggling or homesick. Along with two other non-traditional students, we became the Moms-on-Campus.
Teachers are expected to update their teaching certificates through professional development and continuing education. I certainly could have been happy to do that, but like many teachers at Aurora Public Schools, I decided to attain an advanced degree. Seven years after receiving my bachelor of arts degree in education and English, I commenced work toward a master of arts degree in English. Once again, I was in familiar territory as the non-traditional student surrounded by twenty-something graduate students. The biggest difference between undergraduate and graduate students is that some of the graduate students were know-it-alls! I feel very fortunate that I had the opportunity to experience some of the best teachers on campus. As an older student it was easy for me to befriend my professors. It was such a joy to collaborate and speak to them as peers. Graduate school was challenging but by far my favorite stage of the learning process. I have learned more than I could have ever imagined and have been encouraged and inspired to become the best teacher I can possibly be. I have been surrounded by fellow educators who are passionate about teaching and just being around them makes me smile. Being around them gives me hope for the future of education.
Now, I am almost to what most serious lifetime students consider the pinnacle of education: a doctoral degree in composition and rhetoric. I have been reading and writing for the past four years in order to write a dissertation about a subject I’m passionate about, place conscious education. My goal in writing my dissertation titled “Living Well: The Value of Teaching Place” is to convince other educators that teaching place will instill in their students five senses: living well in community and living well spiritually, economically, politically, and ecologically. I believe that teaching students to know their own places well will enable them to know their future communities well, too. Throughout the dissertation process, there have been times I have been completely depleted of energy and felt somewhat hopeless. When I once asked a relative who had both his M.D. and Ph.D. degree about how intelligent he had to be to get those degrees, he replied, “It’s not about how smart you are but whether or not you have perseverance.” I now know that he was completely right about that. If you have the stamina to continue studying, reading and writing, you can complete the most advanced degree. Herein lies the message of Khalil Gibran: “A little knowledge that acts is worth infinitely more than much knowledge that is idle.” I may not be Albert Einstein when it comes to brain power, but I do have a bit of knowledge about writing and rhetoric. And I do know how to act upon that knowledge--using it to empower others in this life. Knowledge that acts elicits learning in others, leading others to the “thresholds of their own minds.” 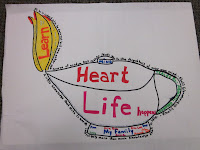