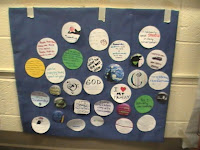 flair
I created my deep map in a style that's a bit different than a traditional map. Because I am not the most gifted artist in the world, I decided to answer the questions: "Who am I?", "Where am I?", and "What is my purpose?" with words rather than an actual drawing. My map is supposed to resemble a facebook flair page. My facebook flair page to be exact. Because I regually use facebook to keep in touch with faraway friends, as well as the ones I see everyday, I thought it would be appropriate to include the theme since my friends are a part of who I am.
All of my flair are spread out across a blue background (the only reason for this is to contrast the white buttons) and range from different sizes, colors, and levels of seriousness. Most of them are hand-written, while a few designs were printed off my computer because the were too complicated for my feeble drawing skills.
I tried to arrange my flair randomly to make sure that colors, themes, and sizes were all spread out. On the other hand, I also tried to put the most important flair to me in the center of my poster. The button that reads,"GOD. Because not all things can be answered by Google.", took this position because faith is a BIG part of who I am, and why do the things I do.
If there's one question that got the short end of the stick on my map, it would have to be the "Where am I?" question. This however, I suppose is to be expected when I didn't draw a traditional map with places on it to begin with . . .I would definetly say my map is lacking a Nebraska button and/or a corn button.
Some of my buttons remind me of other groups of people or locations like my "I quote OIDS" button that I associate with my speech team, the "It's marching band season". "I heart my family", and "my sister has the best sister" are pretty self explanitory. As for places . . . Honestly, any of the previously mentioned buttons remind me of Aurora, because that's where the memories of the people I associate them with are. Other buttons that were sent to me as gifts however, such as the "I speak Spanish" button was from a friend who lives in Washington, so that's who and where that piece of flair reminds me of.
If I had to give my map a title, it would be called "flair". Not too terribly creative of a title, but I thought the idea itself was creative. The fact that no one else did a flair page for their map is what I like the most about mine; it makes it unique. I dislike the fact that I mainly focused on two questions, and neglected the third.
On some the verymost edges of the map we find some of the less serious buttons, such as the "Office" button, "I used to be cool. Now I drive a Minivan." button, and one of my personal favorites, the "Rawr. I'm a sparkly vampire. Fear my glitter." button. While these are definetly a part of my now, they may change in the future. That's part of the beauty of humanity though; our ability to change. So while my deep map consists of button that reflect the three questions now, I'm curious about what it would look like if I made another one in fifty years . . .
Posted by Cathie English at 9:21 AM