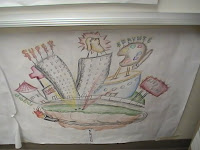 My City
My deep map says a lot about who I am, and who I want to be later on in life. I have many different buildings and other objects on my map. Most of the objects are all non-living except for the grass. Everything takes place in a small city in the air, supported by a pole.
Flashing with the 'Home' sign, is of course, my home. It doesn't really look anything like it, but it is a representation of where I live. My home is important to me because it was where I grew up and spent most of my life, and will have a lasting effect on me. It is the origin of my morals and beliefs, not to mention a large portion of my childhood- a very important part step in my life.
The hospital and graphic arts buildings represent the two careers that I'm considering going into. While the graphic arts building represents a possible future career in digital art such as commercial advertising, the hospital is another big career choice. It could possibly represent a career in pharmacy or even a lab technician.
The two giant buildings, the "Super Foods" building and the dog building represent the places of work. The dog building stands for the Humane Society that I volunteer at. While I don't get paid to work there, it is still an important to me. The Super Foods building has not only played a big role in my life, but has also took a large amount of time out of it. Working at Super Foods has taught me good work ethics, and has provided me with money to which I can begin starting my financial living later on in life.
Circling the city is a roller-coaster type ride. I think this represents the fun side of me that likes to go on rides at amusement parks or fairs, and that I enjoy games.
Last is the "City Ville" sign. This shows that I want to someday move to a more larger city than Aurora, with more opportunities. Aurora has been my foundation for many personal dreams and morals, but I think later on I will want to move away from the nest, and be a part of the hustle and bustle of the "real" business world.
Overall, I think I covered most of what I do in my life with my deep map. It shows where I am currently, and where I want to be-not to mention some of the things I do in my spare time.

Posted by Cathie English at 9:19 AM